Congratulations to Jeff Majors on shooting the newest placeholder in The Buckmaster’s Whitetail Trophy Records World Record Velvet Typical out of Hopkins County, Kentucky. Dale Weddle, an official scorer, measured the buck for a green gross score of 183 ½” for Pope & Young. The velvet 8-point has three kickers and a split G2, and if you include the spread, measured an INSANE 191” and was already 220 lbs field-dressed in the early season.

“He was way bigger than I thought. In trail camera pictures and on the hoof, I thought he was a 160-class buck. He’s my biggest buck I’ve ever killed,” said Majors.

Kentucky’s bow opener begins the first Saturday in September, so there is a likelihood a hunter can claim a velvet whitetail buck. Majors claims that when bucks down there shed their velvet however, their travel pattern changes. It wasn’t any different with this particular buck. “He was camera shy. He’d ghost once his antlers were stripped,” Majors said. The only pictures he had of the buck were in velvet at night, and as soon as he would shed his velvet, he’d disappear.

For four years, Majors consistently used Big Tine Blocks and Fortified Deer Blend. “It’s some of the best stuff I’ve used. I’ve used other products but nothing compares. The cherry rush is a long-range attractant… I buy a couple of bags every week.”

Big Tine Fortified Deer Blend is formulated to be easily digested, enhance growth, development, overall health, and longevity of whitetails. This blend uses the powerful attraction of Cherry Rush to bring deer in quick and hold them on the property. Big Tine Blocks offer twenty-five pounds of nutritional goodness for a herd. It’s a great food source to pair with a bag of Big Tine Fortified Deer Blend as Majors did.

Fast forward to 2019, the opening weekend of Kentucky’s bow season, Majors carried in a bag of Big Tine that weekend and poured it out in front of his camera. Majors hung his cameras in mid-July and waited a few weeks to check them. “The first pictures I got were of him. I thought he was a 160-inch deer,” claimed Majors.

It was Friday the 13th when Jeff Majors got into his stand. “Around 5:30 pm, the big 8-pointer stood up, 80 yards away. He had been lying there the whole time.” The buck crossed a ditch and closed the distance at 30-yards for just a moment. Majors drew back but were unable to get a shot. The buck went to the creek for a drink before bedding down at 40 yards. Majors watched the buck for about an hour and a half.

Eventually, two does have made their way to the area, one of them spotting Majors and busting him. Majors waited for the buck to spook, but he remained bedded. Majors thought it was all over. Time flew by and it seemed Majors would never get his opportunity, but then, the buck stood up at about 7:00 p.m.

He began walking towards Majors and closed the distance head on to 20 yards. Majors came to full draw. The buck stopped and seemed to look right at Majors. He didn’t hesitate. Majors placed the pin on top of the buck’s shoulder and let his arrow fly. The arrow made contact, burying three-quarters of the shaft into the buck.

The buck raced off into a nearby ditch. Majors was certain he wouldn’t be leaving it. “I climbed down, after over 10 minutes,” he says. “I found the tip of my arrow and blood. He was gushing.” As Majors approached the creek, he could see the monster velvet buck lying there. “I took a picture of him and texted it to my wife, cousin, son, and daughter. I knew I was going to need help,” Majors said.

Congratulations again, to Jeff Majors! He intends to freeze-dry the velvet and get a floor pedestal mount with a rubbed cedar tree accent with his Pope & Young and Buckmaster’s plaques. When I asked Jeff how it felt to tag out on a buck one week into the season, he replied, “It’s been miserable. I’ve killed early twice, three deer in velvet.”

In Kentucky, hunters are allowed only one buck tag but can acquire several doe tags. Since shooting his monster velvet whitetail, Majors has shifted his focus to getting his 15-year-old daughter on a buck, claiming they’ve seen up to three shooters but haven’t been presented with an opportunity to connect. In the coming months, Majors plans on doing some duck hunting, planning food plots and preparing for next season. 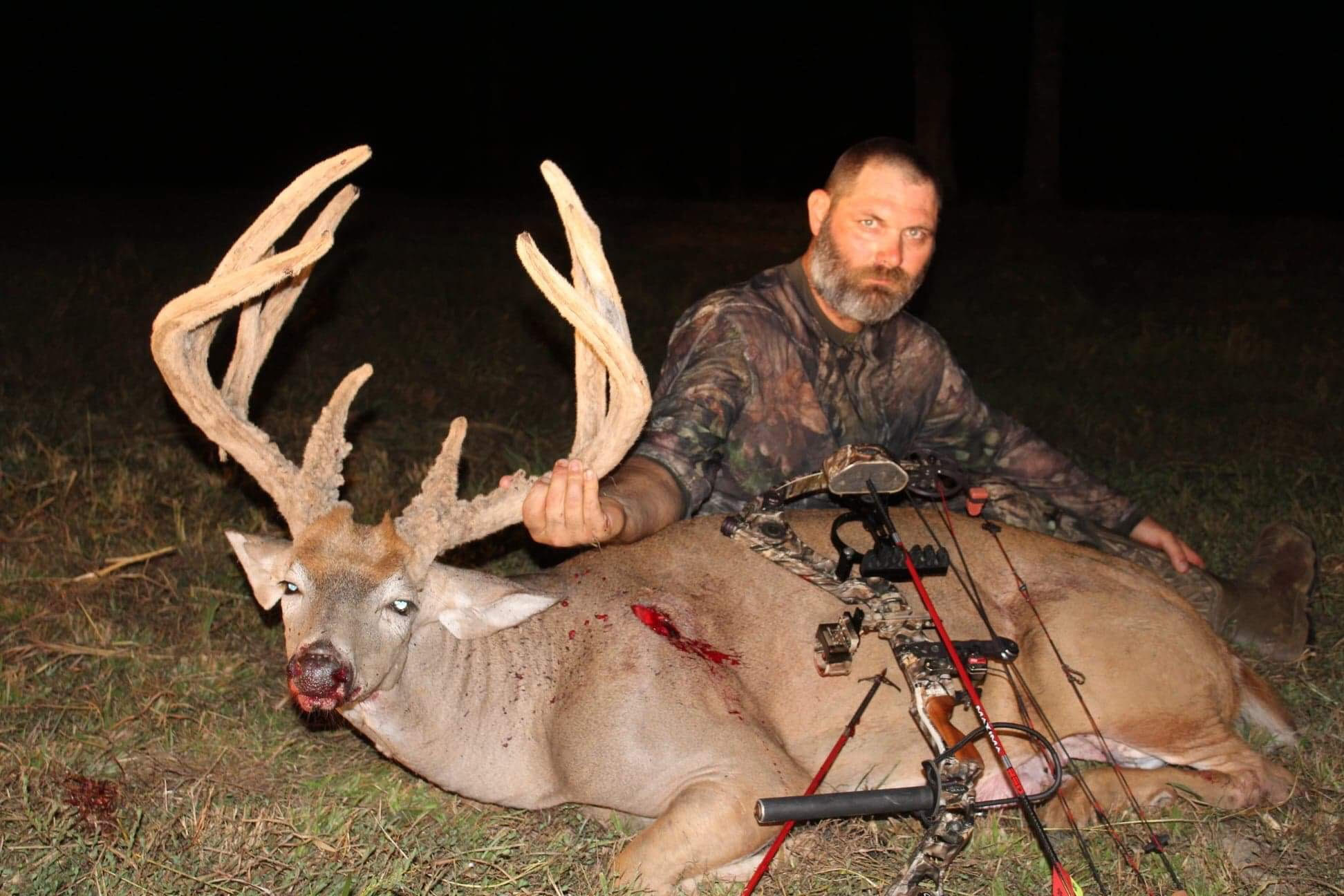