Big Tine would like to congratulate Blake Garrett of Unfiltered Outdoors! Blake has had one heck of a season so far, and we don’t see him slowing down any time soon. Blake’s first buck, a stud 8-point (approximately 130”),  hit the ground on September 9th at Squareshot Outfitters in the Sandhills of western Nebraska. His second buck, named Blue Pill (162”) was shot October 2nd in western Kansas. 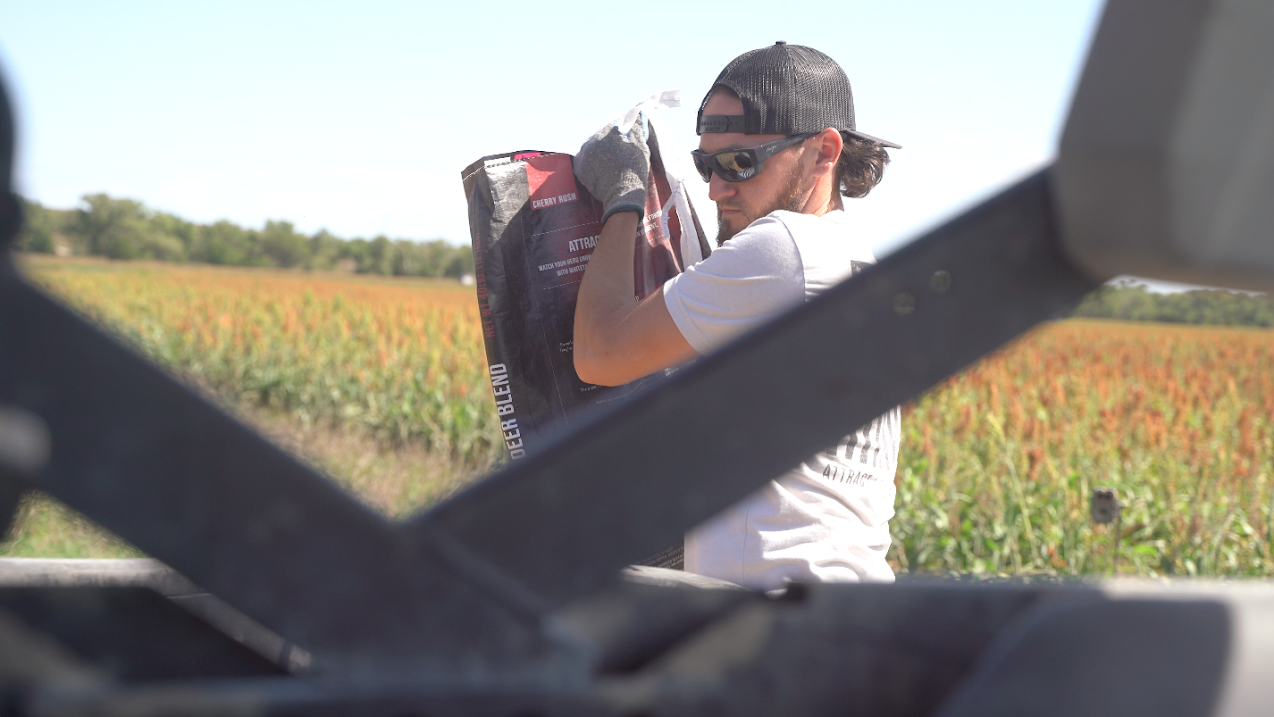 Blake used Big Tine’s Protein Plus and Block with both bucks in order to take inventory and give the herd the nutrition they needed. The Block is twenty-five pounds of nutritional benefits to attract, develop and grow your whitetail and is perfect during the hotter months. Protein Plus gives whitetails the boost they need during antler growth and stressful winter months when nutrition is vital. Its concentrated formula provides even more minerals and Cherry Rush flavor than the 30-06 in addition to roasted soybeans and corn.

“We utilized the attraction level of Big Tine in order to gather trail camera pictures of this buck throughout the summer and we caught him slippin’ on the first night,” said Blake.

It was a short hunt for Blake at Squareshot Outfitters. They had scouted their first evening and had watched the 8-point along with another buck head towards an alfalfa pivot. They decided to move a ground blind into the area, where he would capitalize on the first night of his hunt. 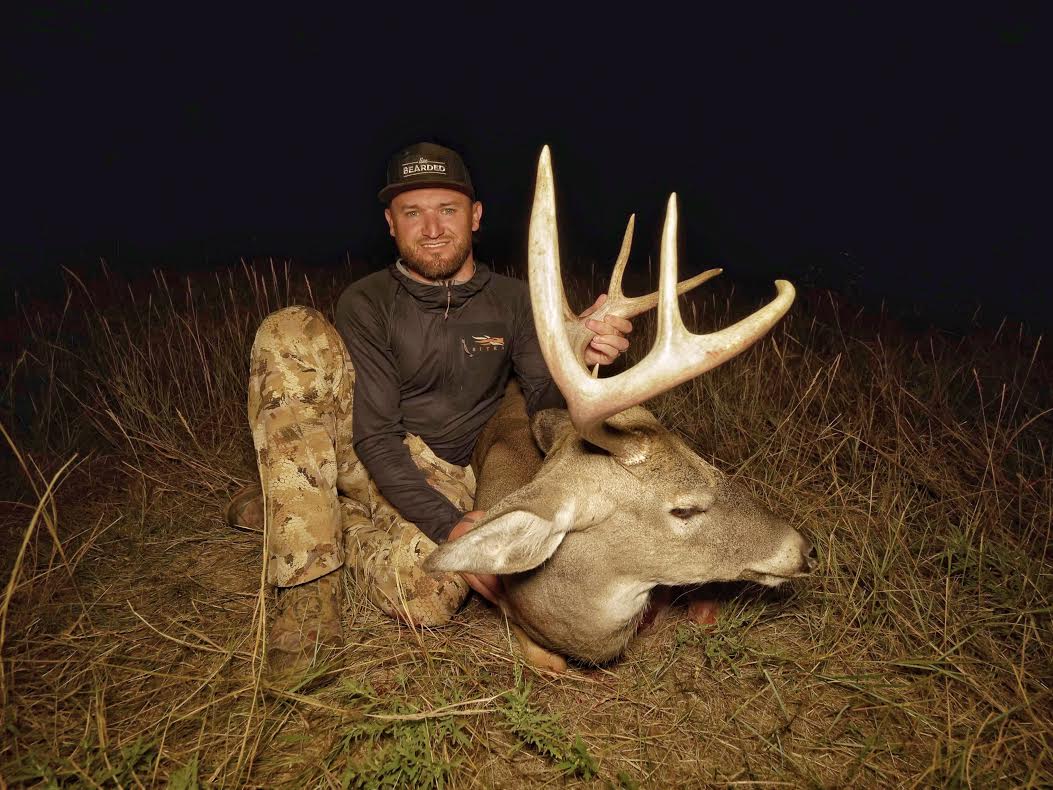 A little less than a month later, in the open pastures, milo fields, and cottonwood river bottoms of Western Kansas, Blake spent a solid nine days hunting for a 6-year-old buck named “Blue Pill” that had a drooping tine off of the back of his G2. Blake mentioned, “We were having trouble getting the mature bucks to show up in the daylight on our corn piles. After incorporating both the Big Tine Block and Protein Plus, we had several mature bucks showing up in the daylight to eat.”

Blue Pill had shown up in the daylight on October 1st. Blake had a small window to make the shot on him because of the direction he came from. Blake decided to take the shot and watched his arrow hit a limb and sail over Blue Pill’s back. The following evening, Blake went back to sit the same stand after refreshing the site with Big Tine Protein Plus. Sure enough, the same buck showed up even earlier that evening and this time, Blake was ready. Blake was able to place a perfectly fatal shot on Blue Pill at 22 yards. 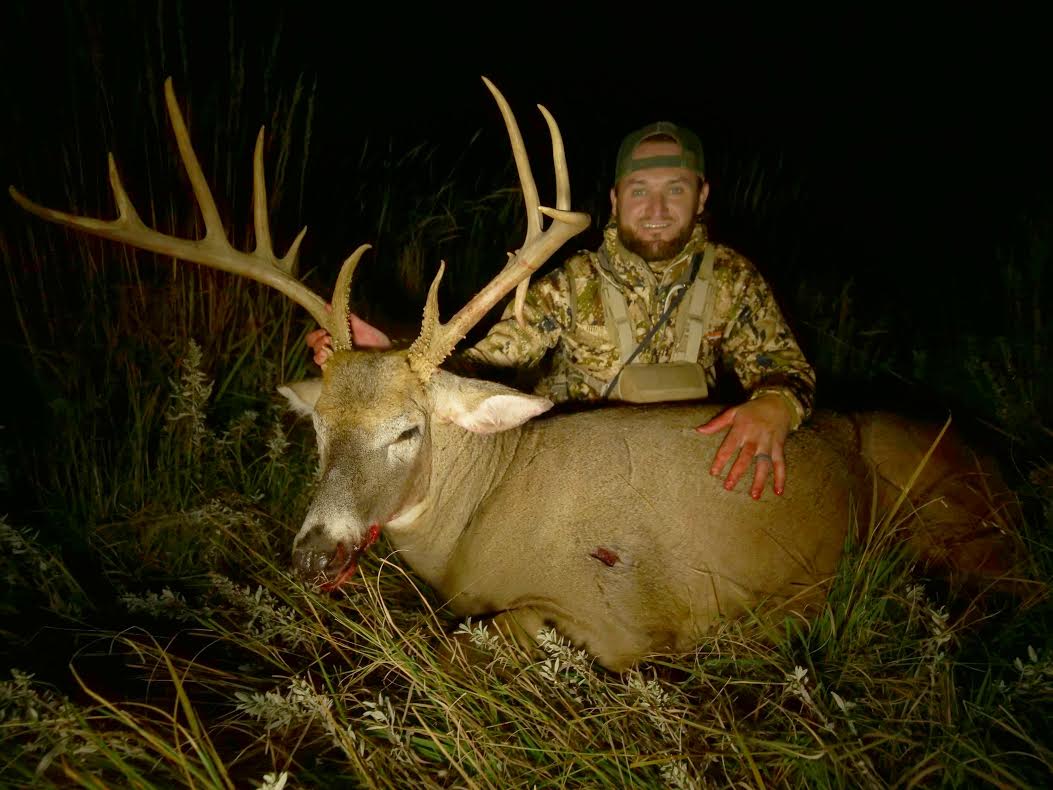 “The entire situation was a great testament to the attraction ability that Big Tine products offer. There is no way I would have been able to take this deer without the incorporation of them,” he says.

Again, congratulations to Blake! Up next, he will be heading to Missouri and South Dakota for whitetail and back to Nebraska for antelope and mule deer. Big Tine wishes Blake and the rest of the Unfiltered Outdoors crew the best of luck on the rest of their season! 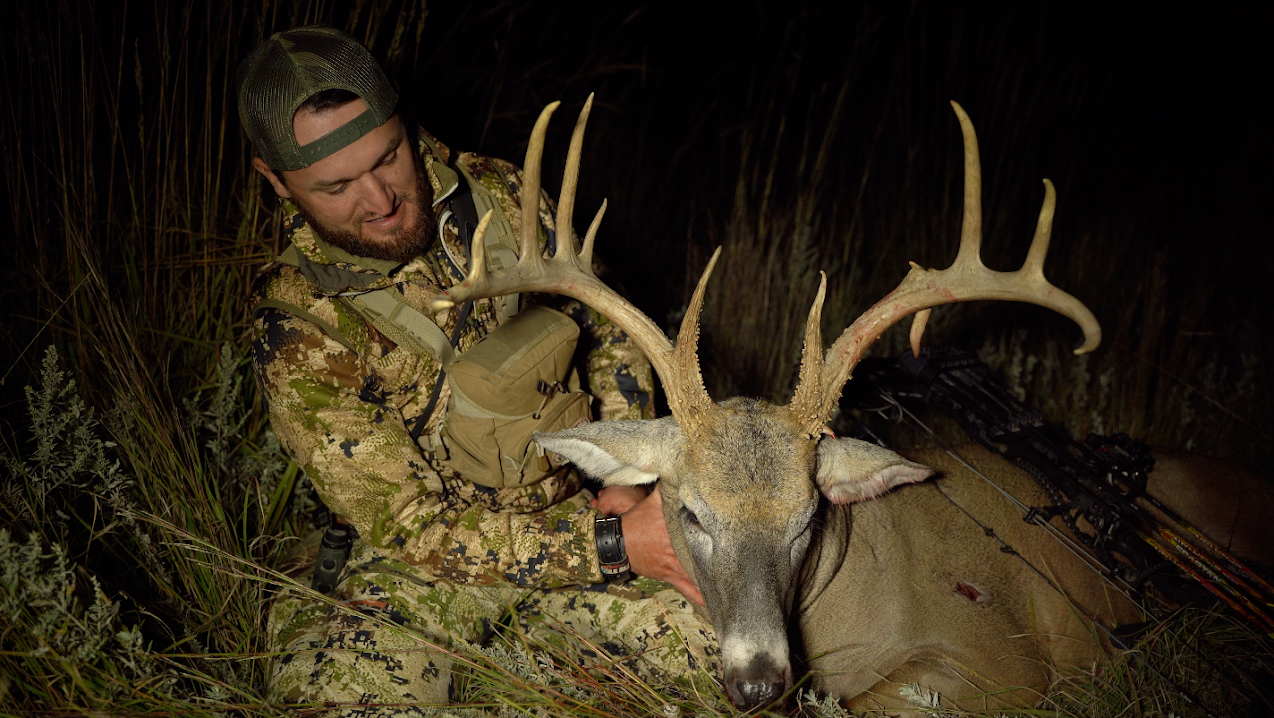