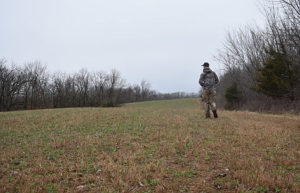 There’s no better time than early Spring to hit the timber and discover what you might have missed from the previous season in the deer woods. By now the snow has lifted its protective cover to reveal the clues and puzzle pieces that can be put together in an effort to learn more about deer behavior, and for those who are willing to put in the time, the payoff can be huge.

Late March and early April is sort of a lull period for me, where I’m not picking up sheds and turkey season is still a few weeks away, so it’s the perfect time of year to really hone in on rut sign. During my scouting endeavors, I’m attempting to locate scrapes and rub lines that were out of sight during the season. I’m also searching for the next potential stand location, which could be tweaking an existing set or mixing things up and trying out a spot that is completely new altogether. For serious whitetail hunters, the fun never stops.

Over the past few years, digital scouting has become an integral part of how I scout whitetail deer for a number of reasons. Having a birds eye view allows me to pick apart the terrain in search of pinch points and funnels for potential stand locations as well as entry/exit routes. Perhaps I overlooked a small swamp that pushes deer travel in a certain direction or a creek bend that could potentially be a crossing hotspot. Using a digital scouting program such as Google Earth allows me to mark potential stand locations, travel routes, food sources, and bedding areas which help identify patterns and behavior. 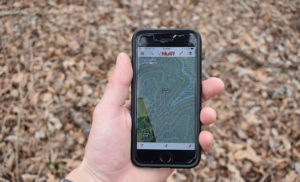 For the guys and gals who are looking to locate new hunting properties, onXmaps is a tool that is invaluable. This software shows landowner names and addresses, property boundaries (private and public), topographical land features, and much more. I especially love using onXmaps while scouting large tracts of public land because I can mark locations on my phone and reference them later in the year during hunting season.

Put On the Miles

No matter how many hours are spent on digital scouting, there’s no substitute for putting boots on the ground in whitetail country. Scouting from a phone or computer is a very good starting point but it’s important to verify those potential findings in real life.  What looks good from the screen of a phone or computer may not always be the case at ground level due to neighboring hunting pressure, changing food sources, and terrain features that may have been overlooked.

Ask the Important Question: Why?

All findings from scouting efforts must be asked a simple, yet important question: “Why?” Asking this will force you to view your hunting property from a mature buck’s perspective. Asking “Why?” upon discovering a concentrated area of rubs on the side of a ridge might lead you to discover a popular travel corridor between bedding and feeding areas.  Asking “Why?” upon finding a buck’s bedding location might enlighten you to change your tree stand entry and exit routes so that he doesn’t bust you during a hunt. All of the data in the world means absolutely nothing if critical thinking or interpretation isn’t applied, so once again, it’s imperative to ask “Why?” in every situation. 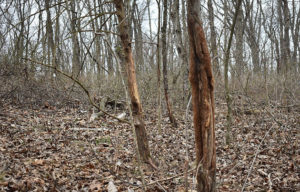 Finding a rub line while scouting is great, but understanding why a rub line is in a particular location is imperative to success. Asking “Why?” will help you hunt more effectively.

The Time Is Now

Before long, the grass will be high and the leaves will be too thick to effectively piece the puzzle together, so the time to get out is now. Make a serious effort to dedicate the next few weeks to discovering something new because deer patterns can vary greatly from one season to the next.  Whether you’ve been hunting the same piece of property for 20 years or you are a beginner looking to tackle public land, post season scouting is never a waste of time. So lace up the boots and hopefully your efforts will be rewarded with a big mature buck hitting the ground later this Fall!