Big Tine is proud to be partnered with The Lindseys. David and Jeff Lindsey of The Lindsey Way, learned early in life that hunting is an important part of their heritage. They share their way of life, passion, and stories about the whitetails they hunt. At this year’s Archery Trade Show, I had the pleasure of interviewing Jeff Lindsey. We discussed the Big Tine products they’ve been using, including the NEW Nitro attractant, and he shared his story of the legendary buck known as ‘Big Chocolate’.

The Lindseys have used Big Tine products for three years, across three states, Iowa, Georgia, and Kansas. Their Iowa farmland is made up of timber, CRP, and agriculture fields including corn, soybeans, alfalfa, clover, etc. Jeff Lindsey said, “The deer hammered the Nitro within days of putting it out. I don’t care how good someone says their feed is or how nutrient-rich, or protein-packed it is if the deer won’t eat it, it’s not worth the bag it’s in. The Big Tine attractant, the cherry flavor, the palatability is the best we’ve ever tried. We’ve tried a lot but there’s nothing that compares to Big Tine.” 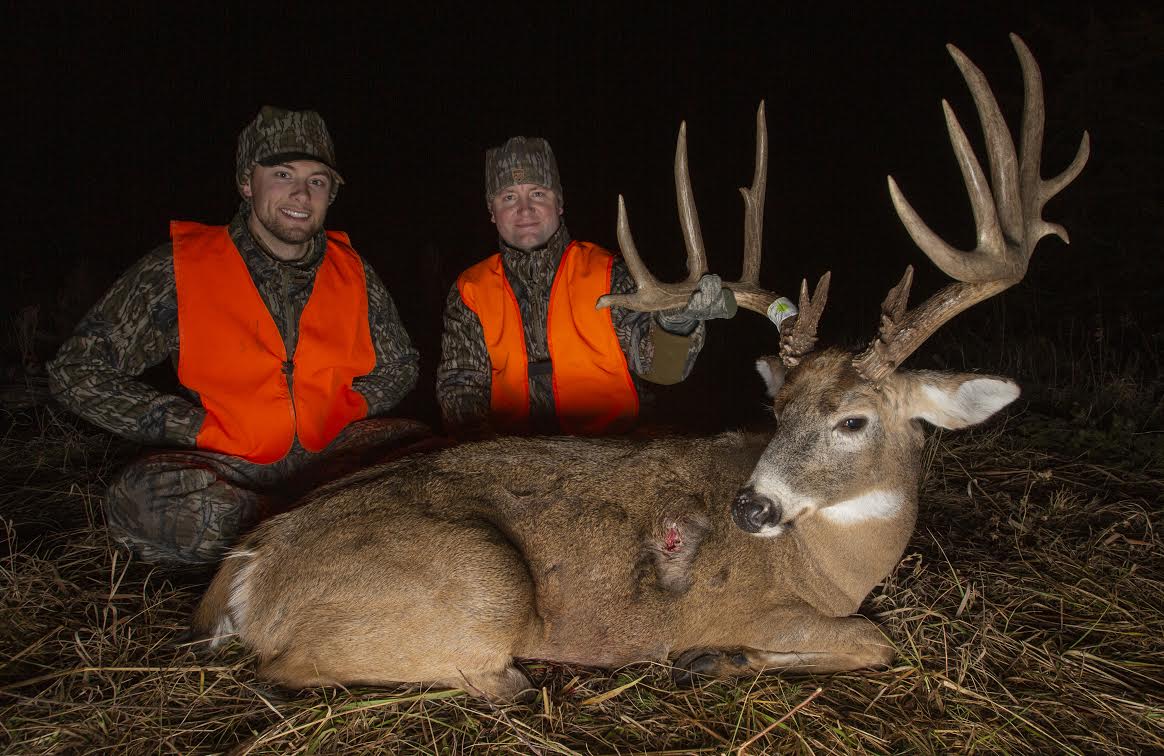 Two years ago, Big Chocolate showed up in the late-season in one of their Iowa cornfields. Big Chocolate looked really good at the time, Jeff and his cameraman debated shooting him, but Jeff knew he could be something special. It was the first time Jeff had seen the buck and he suspected that the buck was about 5.5 years old at the time. He decided the buck had too much potential. The following spring, they found Big Chocolate’s sheds.

That Summer, leading into what the Lindseys would refer to as “the ghost year”, Big Chocolate had grown even bigger at 6.5 years old. They estimated he scored anywhere from 165-170 inches at the time, however, the crew wasn’t able to lay eyes on the buck in person. They decided that one more year wouldn’t hurt. In March of 2019, Cash Lindsey found Big Chocolate’s sheds. He continued to show up everywhere throughout the Summer. The Lindsey’s had pictures of him hitting eight different feeders in his home range that stretched over a mile.

Jeff said, “That is crazy for deer in our country. That just does not happen. Usually, it’s just a couple hundred-acre block, but he was everywhere. He was loving the Big Tine Protein Plus. He was truly built by Big Tine. He had kickers, a ton of mass, 14-inch G2’s, 6-inch bases, stuff everywhere.”

Fast forward to the hunting season, Jeff began fixating on Big Chocolate. On October 21st, Jeff had the buck at 70 yards. “I had to leave for Illinois the next day. He was in that same food plot three times where I had got a lot of pictures of him that summer,” said Jeff. The next time Jeff would be able to hunt Big Chocolate was the rut.

At that point, Jeff knew his home range had moved a little bit. The morning of November 7th, the Lindseys spotted the buck 250 yards away crossing a CRP field. He was no longer a ghost deer. Big Chocolate was now seven and a half years old and as big as the Lindseys expected him to ever be. They were continually getting pictures of the buck on camera but they were having a hard time nailing him down. Eventually, they would catch up with him.

November 14th, it was a calm night. Jeff had set up in a Redneck Blind and Big Chocolate was locked down with a doe. Standing at 19 yards, he was feeding with his head down. Jeff releases an arrow and Big Chocolate ducks. “It hit him high. It was a low point for my hunting career, maybe even one of the more low points of my life. It was a really, really dark time. The week before, the neighbor had shot over his back, we had found poachers on our land, it seemed like everyone was trying to kill this deer,” Jeff tells me. 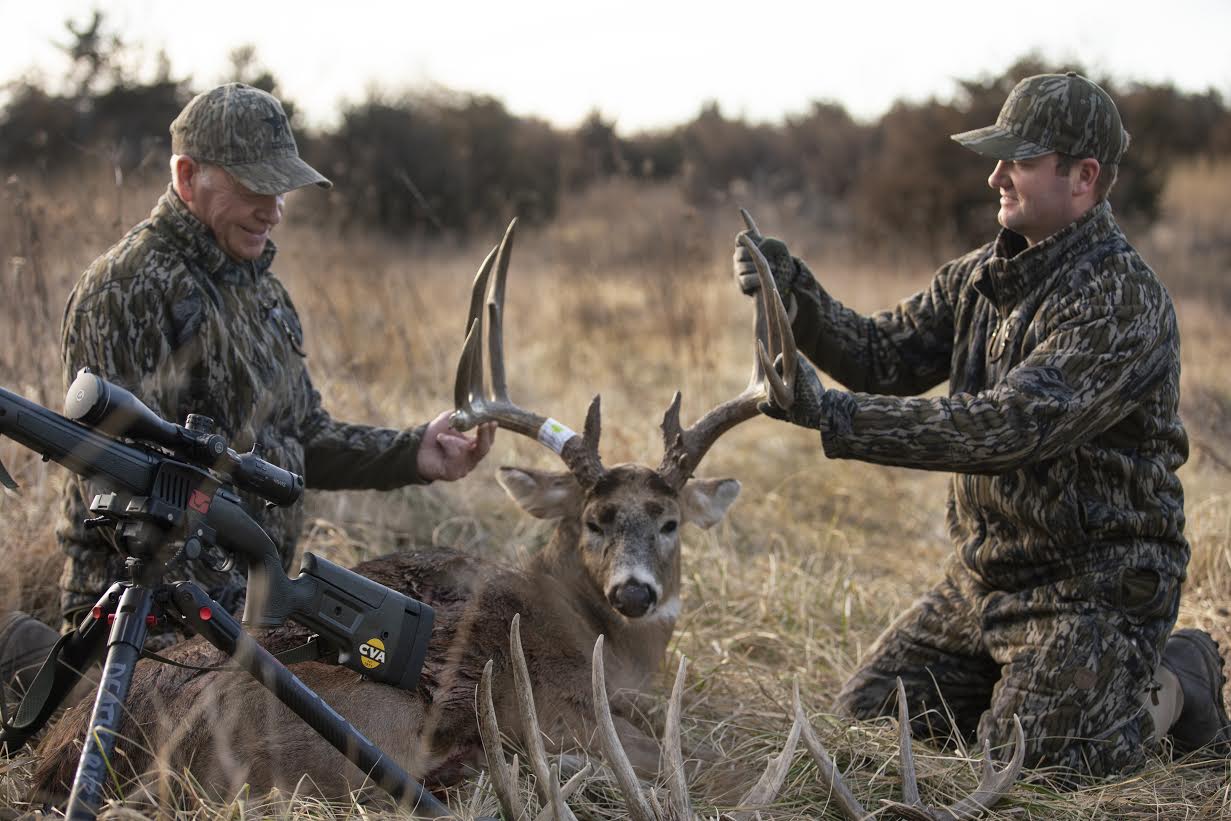 Jeff thought he had potentially penetrated at least one lung. They waited to track him overnight and the next morning, they blood trailed the buck for 600 yards. Big Chocolate bedded down 6 times in a 20-yard circle. They expected he would die, they just didn’t know where. Big Chocolate had disappeared. It was the unknown that gave Jeff Lindsey the biggest pit in his stomach.

Two weeks later, the night before Thanksgiving, David and Jeff were out hunting and felt something special might happen. “That’s usually what happens when we hunt together,” says Jeff. The Lindseys got home to find a picture of Big Chocolate on their Spartan camera at 10 o’clock that night. “I felt like I was back in the game,” said Jeff. Big Chocolate continued to show up once a week and Jeff continued to hunt him. Christmas day, Jeff spotted the buck in a cornfield, about an hour before dark on a bizarre 60-degree day.

According to Jeff, those were the kind of days Big Chocolate seemed to like. He liked the warm days when pressure was typically low. “All the stars didn’t have to align. He just liked the sun shining,” Jeff explained. Jeff was determined, “I said I’m going to hunt him that day and hunt him in that field until I kill him or I run out of season.”

Then, on January 1st, 2020, Big Chocolate was out. It was about 52 degrees and just before dark. The Lindsey’s had placed a blind out in the field in order to attempt to hunt him on a north wind. Jeff suspected that was the first time the buck had been out in that field since he had seen him Christmas day. Big Chocolate took one look at the blind, “It scared him to death and he ran right at us, 80 to 100 yards. I just put it on him and he went 75 yards before he piled up,” he told me. “It was a long story that finally ended.” Where Jeff had shot him on November 14th to where he ended up killing him was almost 1.2 miles away. “We were lucky he went East to West and not North to South because he would have been off our property,” he adds.

If you ask Jeff if the moment was bittersweet, he’s quick to respond with a simple “No”. He goes on to say, “My butt was red from him kickin’ it all year. I was happy to kill him. He was 7.5 years old, he was as big as we thought he would get.”

Jeff says, “I’ve learned over the last couple of days when a deer’s head is down, it’s like a pendulum. When they bring their head up, the back lowers. We estimate he ducked about 6-8 inches after watching the film. We could break it down exactly where it was headed and he dropped…it really hurt my feelings, but that’s the way it goes. I tell myself to aim at the lower third of the body, now. I learned from it. If you don’t learn from it, you’re wasting your time.” 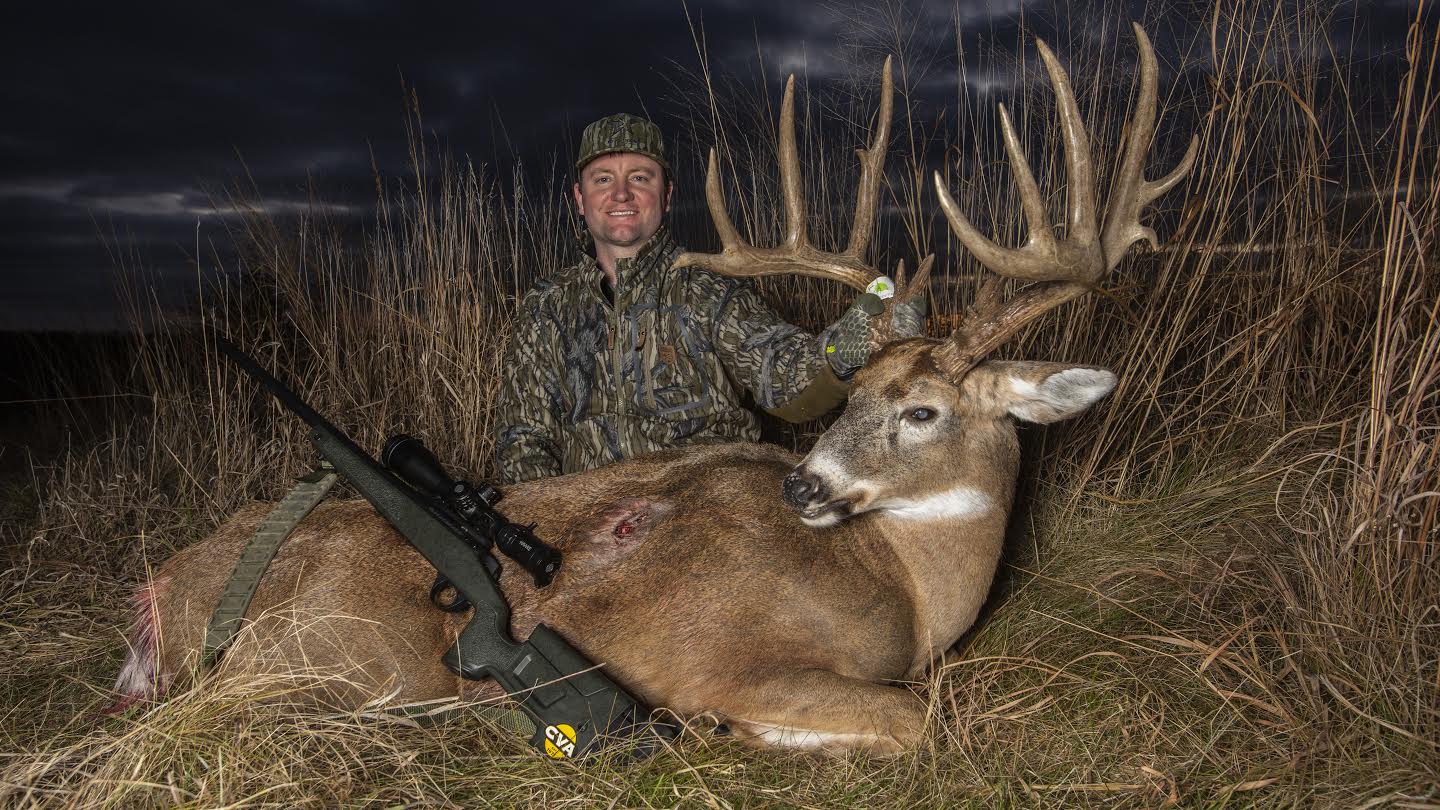 When I asked if it felt like it had given him closure, he replied, “It did. To be honest, we thought he was going to die.” In November, Jeff worried he might die on the neighbors, that they would find him as a deadhead during the shed season or that they would never find him at all. It’s moments like the one Jeff had in November, that can crush a hunter’s spirit, but persistence and resilience certainly pay off. Congratulations, again, to Jeff Lindsey on such a unique and legendary buck!