TOO CLOSE FOR COMFORT: BOWHUNTER BITTEN BY A BEAR

TOO CLOSE FOR COMFORT: BOWHUNTER BITTEN BY A BEAR 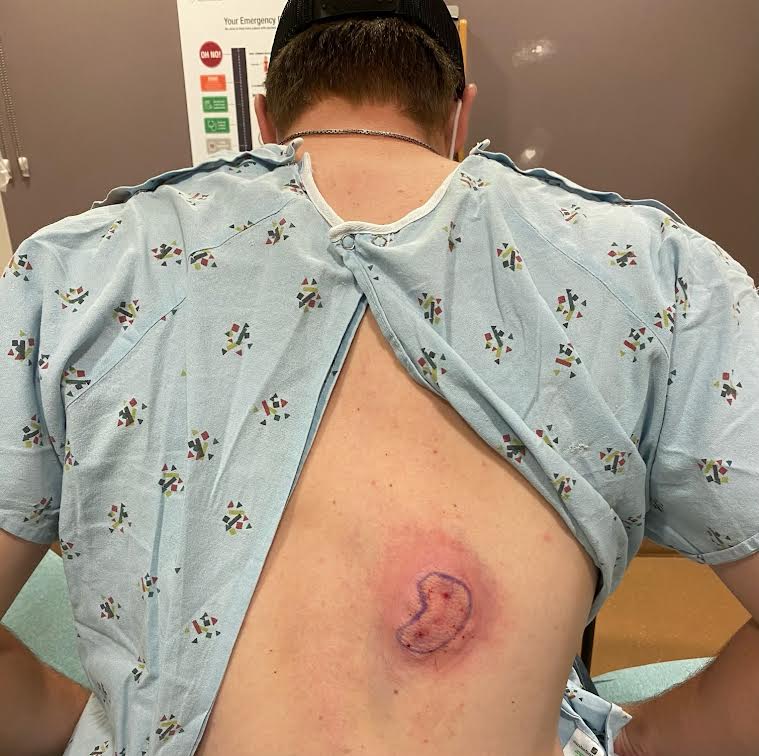 It was a typical fall Saturday for Wisconsin native and pitcher for the St. Louis Cardinals, Dalton Roach. He headed for the woods to chase after a familiar 4.5-5.5-year-old stud buck with his Mathews VXR 31.5, hoping to catch the shot on his Tactacam. He had hunted this property for quite a few years and while he had seen black bears on his trail camera, he had never actually encountered one in the woods. What started as a rare sighting would become a story of survival.

When Dalton initially spotted the bear, he assumed it would take the route he had seen it go on his trail camera. He was downwind from the bear and had entered the woods from the opposite end, so he didn’t suspect the bear had smelled him. As most hunters would likely do, Dalton pulled out his phone and began recording the sighting.

In the video, you see the bear making his way through the woods in front of Dalton, closing the distance to 20 yards. Dalton assumed he would continue on the same path but then we see the bear heading directly for the base of the tree. You can see the bear sniffing the ladder leading up to the stand. It was at this point that Dalton decided to put his phone away. Contrary to other opinions, I’m not sure I would have done the same. As someone that’s had several close encounters myself, I know black bears are typically just as, if not more afraid of humans than we are of them. Dalton knew this too.

Suddenly, Dalton heard the distinct sound of the bear climbing his tree. He remained still. He felt a paw in his lap, the hot breath of the bear on this back, and then, his camo began to tighten. It wasn’t long until he realized the bear’s jaws were gripping his back. “I could feel the power of those jaws and it wasn’t even close to what they’re capable of,” he said. Dalton’s first instinct was to turn around, make himself as big as possible, and begin yelling.

Per usual, internet trolls have come out from under their keyboard bridges criticizing Dalton’s initial actions, saying he should have shot the bear (with his bow at inches of distance) in self-defense. HOWEVER, I think it’s worthy to note, it takes someone pretty BAD*** to stand FACE TO FACE WITH A BEAR, ACT BIG, AND YELL AT IT! NOT TO MENTION, HAVE IT WORK. “I didn’t shoot because it wasn’t acting  aggressive,” said Dalton.

The bear shimmied its way back down the tree and began to slowly walk away, peering back at Dalton, likely confused. “Everything that bear did seemed to be out of curiosity and until it was biting me, I don’t think it even knew what I was. It was like a dog getting a new toy, the bear slowly bit down,” Dalton said. When the bear was out of sight, Dalton packed his things and called his buddy to explain what happened and to have someone on the line while he walked out. After all the commotion, he wouldn’t likely see deer anyway.

I asked Dalton if his buddy and wife believed his wild story at first, to which he replied “I think they were confused.” Dalton’s wife urged him to go to the Emergency Room where they cleaned the site, administered antibiotics, a tetanus shot, and twenty rabies injections in and around the bite with three rounds of vaccine boosters to follow. 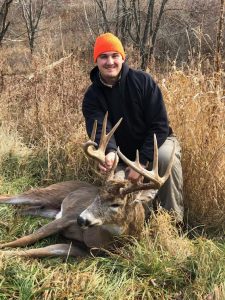 Although Dalton doesn’t currently carry a sidearm, he has considered the possibility. Knowing it was such a rare event, Dalton isn’t too concerned about further interactions with bears. He has been collecting points for black bears in Wisconsin for years and hopes to draw a tag soon. We discussed the possible irony of the two meeting again in the woods someday but with a tag in Dalton’s pocket.

In the meantime, Dalton plans to enjoy his passion for hunting, pursuing a career in the MLB, and spending time with his wife and their son. Best of luck to Dalton the rest of the season! Big Tine hopes you remain bear bite-free the rest of the season and that you connect with the buck you’re after! You can follow Dalton on Instagram at @daltontroach.