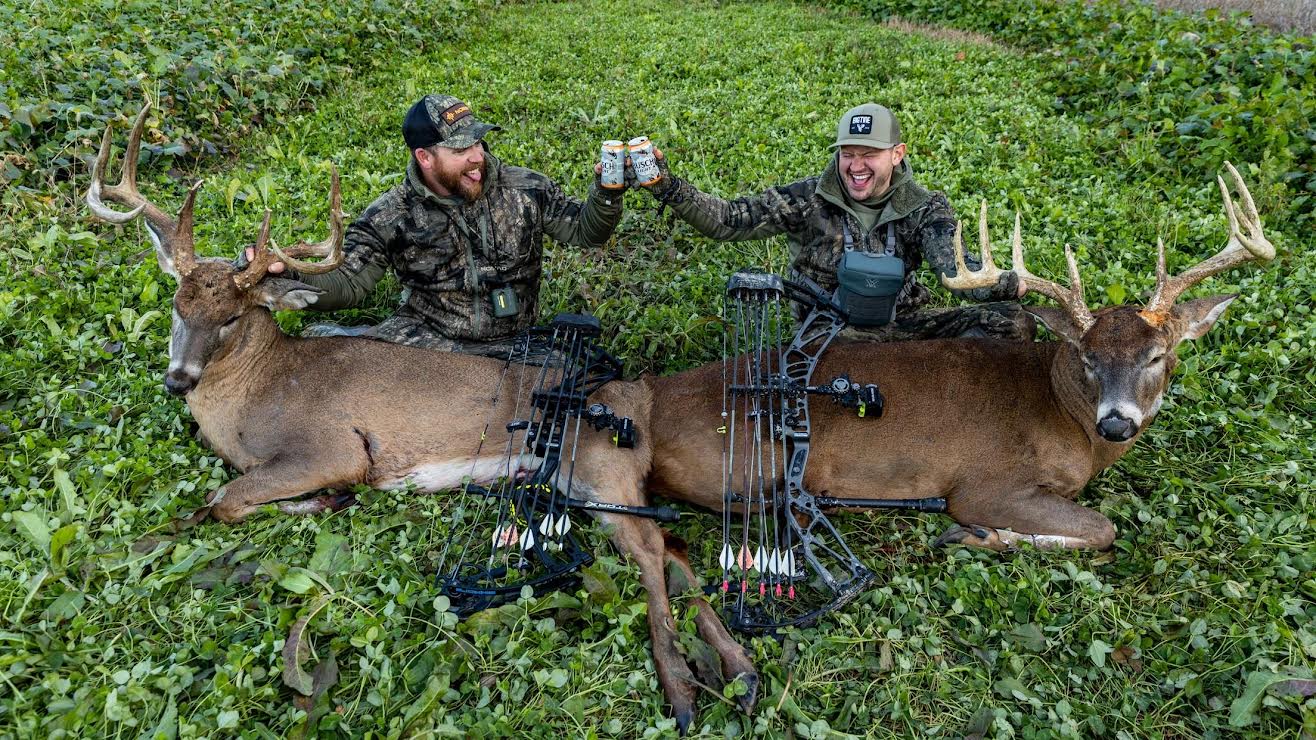 William “Bill” Unger introduced TJ to whitetail hunting when he was about 9-years-old. Every season, his father would take him to a family-owned farm to share the experiences of the whitetail woods. Countless hours were spent in the woods, making some of their best memories over more than 30 hunting seasons together.

A few months ago, however, their time in the woods together earthside would end. TJ’s father lost his battle with cancer and the 2021 season would begin to carry a tremendous level of emotion. In his heart and mind, TJ knew he wasn’t going to be able to call his Dad to tell him what he saw, talk through the challenges, joke through the frustrations, or reminisce old stories together. It was these things that weighed the heaviest on TJ’s heart this season.

It was Wednesday, November 3rd, 2021. TJ climbed down from a frustrating morning hunt after hound dogs had cleared the woods. He began walking through the oak flat where he and his Dad field dressed a few deer over the years. He spent some time at the Beech Tree where they had carved their initials over 25 years ago.

Finally, he found his Dad’s tree and an old metal folding chair. When TJ was young, his Dad would drop him off at his spot and walk to this tree that he favored for the view. It’s a little rusty, but his chair remains as it has since the early ’90s. Although TJ didn’t find the sign he had hoped for, in a serendipitous way the area was calling to him.

That afternoon, TJ hung a stand right next to his Dad’s tree and chair and in TJ’s words, “it all just felt right.” He anticipated one of the mature bucks would move in soon to check the bedding areas not far from that spot. “Before I left, I put a cell camera on the main trail and stayed out of the woods, waiting with anticipation,” TJ said.

Three days later, late Saturday night, the cell camera lit up.  A well-known mature buck, called “Roadhouse” was 50 yards from his Dad’s tree, following a large group of does. The forecasted wind was marginal and the time was right.

“Sunday morning, I slipped into the stand well before light, said a good prayer, and enjoyed the time watching the woods wake up,” TJ added. “I knew the odds were good that ‘Roadhouse’ was bedded close. At sunrise, I made my presence known with a deep, loud buck grunt and a ‘snort wheeze’.”  Ten minutes later, “Roadhouse” came off his does.

He started with making a few scrapes, tore apart a Paw Paw patch, and stiff-legged walked into within 25 yards from his Dad’s tree. “I focused on a well-executed arrow and listened intently for the sound of a crash,” he noted.

It wasn’t until TJ sat back down and collected himself that he remembered where he was. “I climbed down out of the stand, sat down beside Dad’s chair, had a talk, and a good cry. I thanked God for another epic hunt with my dad,” TJ said, reflecting. He adds, “The date was 11/7/2021. Dad passed on 7/11/2021.”

Meanwhile, in a 30-year-old, 30-acre combination of pine and hardwoods, Brady would have his encounter with a buck he had known since August 25th, 2017. Brady claims, “I immediately noticed his notched ears. I named him “3-4” like you would read a pig’s ear notches. He was a straight clean 8 point and I assumed his age to be 4 at the time. After their meeting, Brady dumped a couple of bags of Big Tine feed and immediately started getting pictures of him, but he managed to slip through the season without being seen.

Four years and many encounters later, consistently on feed every summer and winter, Brady got his first picture of him for this season. On August 29th, in his typical fashion, “3-4” was at the feeder. “He blew me away. He put on a bunch of antlers from the year before and started throwing a little trash, but this year he was back to being an 8-Point,” Brady states. Brady estimated the buck was about 8-years-old and no matter what, he would be Brady’s number one on the hit list. By October though, “3-4” was nowhere to be seen with just three pictures since early September.

As if in perfect unison with TJ, Brady slipped into his stand right at daylight on the morning of November 7th. Brady’s expectations were low. Not long after getting settled, he caught a good buck working through the woods. He wasn’t sure it was “3-4”. Shortly thereafter, Brady caught a glimpse of the same buck running a doe to the south about 200 yards. This time, he was positive it was him. The buck followed the doe through the woods grunting. Suddenly, she closed the distance to 32-yards and he was quick to follow.

Brady drew, stopped him, settled his pin, and squeezed the release. He knew instantly the arrow was right where it needed to be. The buck stopped just inside the woods and started walking away out of sight. Brady sat down trying to calm his nerves and scrolled through his Covert cell cameras to see if they would catch him running inside the woods.

Two of three pictures showed him walking towards the camera with blood flowing from behind his shoulder. In the third picture, “3-4” was dead on the ground right in front of the camera. “I couldn’t believe it,” Brady said. “The hunt for such an elusive, old mature deer was finally over.   I don’t think I can ever replicate the feelings and emotions of wrapping my hands around “3-4” after all this time.” For Brady, it’s bittersweet to think he won’t get to hunt “3-4” next year, but the memories and camaraderie that were had that day and the past 4 years will stay with him forever.

TJ Unger and Brady Miller have hunted together for almost 7 years and have experienced many obstacles. This year, they spent countless hours prepping for a season that would truly be one for the books. While they’ve used just about every Big Tine product ever made, this season, they made use of our Big Tine supplemental feeds and minerals, Cherry On Top, Happy Hour, Lock Down, Long Range, and Foundation Clover food plot seeds. “We work all year round to build better bucks and strengthen our deer herd with Big Tine. Although it boils down to seconds to be successful, using the resources Big Tine offers is what helps us to get there,” the guys said.

Congratulations to TJ Unger and Brady Miller on these two magnificent bucks!

We use cookies to ensure that we give you the best experience on our website. For example keeping FT sites reliable and secure, personalizing content, providing social media features and to analyze how our sites are used. By clicking okay, you agree to continue. OkPrivacy policy