From spring to early summer, the world around us begins a process of regrowth and rebirth. Lush grass re-emerges from the soil, the woods becomes green again, plots are prepped, and fawns begin to drop. Now is the time to assist your whitetail population achieve optimal health.

Everyone wants the secret to growing bigger, better bucks, but it’s imperative to focus on the health and nutritional needs of the population as a whole. Some see supplemental feeding as baiting. They see it as a way to bait deer under a tree to be shot, but really, there’s so much more to it. When hunter’s render a supplemental food source for whitetails, they aid the population in antler growth, weight gain, enhanced immune response, reproduction, decreased mortality, pregnancy, lactation/nursing, and fawn survival. 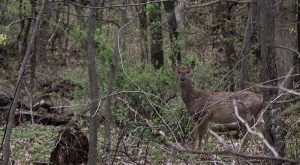 By providing a high quality diet throughout the year, the chances of a doe having more fawns is greater and with healthy mother’s, comes healthy fawns. If a doe has a low body weight, the fawn could have a low birth weight, which could affect a fawn’s survival. Fawns strictly nurse for the first two weeks of their lives. A fawn depends on their mother for their nutritional intake to survive their first months. Typically, fawns aren’t weaned off their mothers until after ten weeks.

Protein is necessary for all whitetails this time of year, but when it comes to does and fawns, it’s needed to produce adequate milk and assist in rapid fawn growth. Fat provides energy and is needed for the late summer and fall months. While nursing however, fat is expended from the mother and will need to be replaced.

Assisting does and fawns with their nutritional needs will help them reach their optimal genetic abilities, benefit the population as a whole, and some day, your hunting experience. 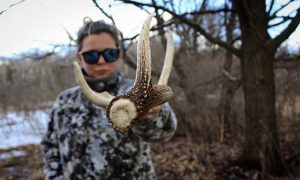 Following a long winter, protein and calcium are crucial for regaining muscle and the growth of antlers. Whitetails require a daily intake of 12-16 percent protein to meet their prime bone and muscle development. 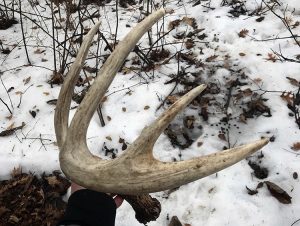 The Quality Deer Management Association  reports, “Growing antlers are composed mostly of proteins; whereas hardened antlers contain roughly equal amounts of proteins and minerals. Studies have shown that calcium and phosphorus are by far the two most common minerals in deer antlers, comprising 30-35 percent of the mature antler by weight.” Calcium and phosphorus provided by the body system of the whitetail itself, is only a portion of what is needed for optimal antler growth. The remaining requirements come from their diet during the active growth stages.

During the mid-summer months, if there is less rainfall, the nutrition level of the food decreases, which may inhibit antler growth. 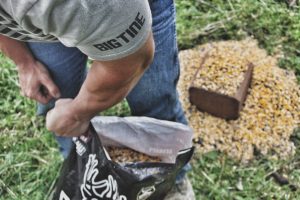 Serving your whitetail population with the vitamins and minerals they need supports their immune and reproductive systems, generating an overall healthy population. If a whitetail doesn’t have adequate nutrition, it’s immune system is more likely to become compromised and the nutritional deficiency can have an effect for up to two years. With lush foliage consumption early in the summer, whitetails have an increased water intake, and therefore need to balance that intake with sodium for efficient conversion in the body. In cases where natural forge becomes less available, supplemental food should be an option. 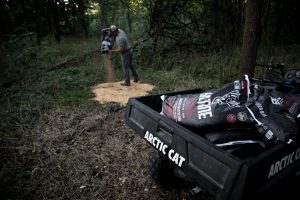 Having a variety of food sources providing phosphorus, sodium, fats, water, carbohydrates, calcium, and protein is beneficial to maintain a healthy population. Whitetails need their energy in the late summer and fall months to prepare for reproduction, carry them through the winter, and assist them in developing healthy fetuses. If fawns don’t develop appropriately and have a low birth weight, their chance of survival may plummet.

Focusing on the health and nutritional needs of your whitetail population is imperative. Without adequate nutrition, the effects could be detrimental. There’s so much more to supplemental feeding than baiting. Rendering a supplemental food source for whitetails assists in antler growth, weight gain, enhanced immune response, reproduction, decreased mortality, pregnancy, lactation/nursing, and fawn survival.