There’s often a reason behind success and rarely does it come from happenstance or sheer luck. For the serious whitetail deer hunter, gone are the days of the “weekend warrior” and merely hoping for a successful season. The victorious hunter writes their own destiny through year-round hard work which entails scouting, habitat improvement, stand placement, meticulous planning, and proper nutrition for the health of the herd. For the do-it-yourself men and women of the whitetail world, trophies on the wall are earned through blood, sweat, and tears and a perfect example of this is the story of Trisha Rector and her three-year quest to kill a buck she calls “Resurrection.”

Trisha began hunting at the age of 10 in her home state of Kentucky and ever since she killed her first deer at age 15, she’s been hooked. Her and her husband, Patrick, hunt their families farms in which they heavily manage for a healthier deer herd that produces big mature bucks. “Big Tine plays an important role in our management practices and allows us to have an overall healthier herd, which ultimately leads to bigger deer running around our farms” states Trisha. “We have been using Big Tine for the past two years and we have had great results!”

Trisha Rector feeding the deer what they love, Big Tine Protein Plus!

Her and Patrick begin putting out Big Tine Protein Plus in early Spring to help the deer recover from the Winter months and when Summer rolls around, they transition to Big Tine 30-06 to help maximize antler growth and development.

A World Turned Upside Down

In October of 2013, her world was turned upside down when she was run over by a car while working at her construction job and in the blink of an eye, her life would be forever changed. Ever since that day, her days have been filled with countless physical therapy sessions and years of rehabilitation, but she has no plans of slowing down. A year later after her accident, with the doctor’s approval, she started running and working out again with a goal to get strong enough put a bow back in her hands. Trisha is the type of person who never gives up no matter what is thrown her way.

Around that same time in 2014, her and her husband Patrick started getting pictures of a three-year-old nine-point, whom they later named “Resurrected” and she made it her objective to shoot that buck with a stick and string. As luck would have it, the opportunity presented itself not only once, but TWICE in the same season! With only being able to draw a max weight of 40-pounds, both shots didn’t get the penetration they needed for a lethal hit and “Resurrected” walked away unscathed. As you could easily imagine, Trisha was devastated.

When 2015 arrived, Trisha was back with a vengeance to get stronger so that she could increase her draw weight to maximize arrow penetration, vowing to never let the events of last season happen ever again! Through dedicated practice and discipline, she was able to increase her poundage from 40 to 52 pounds in a matter of two weeks. In late Summer, they started getting pictures of “Resurrected” on their cameras but there were bigger deer on the other properties they hunt so she focused her efforts on a different buck. That Fall, she killed a different hit list buck but “Resurrected” was still heavily ingrained in the back of her mind.

Planting food plots have been a big part of the Rector’s deer management strategy on their Kentucky farms so in 2016, they added a Big Tine Buck Brunch plot which is a great mixture of clover, turnips, rape, and cereal grains. Throughout the Summer, trail cameras were running non-stop over Big Tine 30-06 and Big Tine Blocks to see if they could once again pattern “Resurrected” and sure enough, he was back for the 2016 deer season. 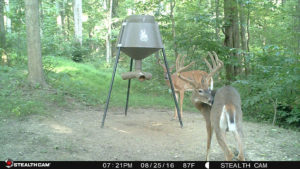 “Resurrected” shows back up to a feeder filled with Big Tine 30-06 in late August.

Fast forward to late September, Trisha and Patrick set up a ground blind, a trail camera, and a bag of Big Tine 30-06 on the edge of a food plot to try to locate the target buck. They hunted the area for the next few evenings but kept getting busted by deer so they configured a new plan for the following day.

With a wedding to attend earlier during the afternoon of October 1st, chances were slim that Trisha and Patrick would be able to hunt but with the weather right, they rushed home from the reception and hit the woods. With little time to get dressed, they drove to the farm and by 6pm they were settled into the blind with a bag of 30-06 and a Big Tine Block within bow range.

At 7pm, Trisha hears the unmistakeable sound of a stick break to her right and catches the movement of a big bodied deer making its way towards the food plot. “It’s him!” she whispers to Patrick in excitement. Moments later, Trisha comes to full draw and sinks an arrow behind the shoulder of the buck at only 20 yards! She knew she had hit him good with a double lung shot and within 100 yards, the final chapter was closed and “Resurrected” laid dead. 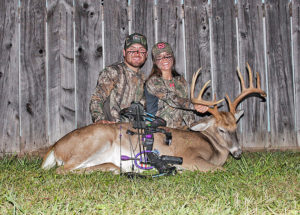 This just goes to show that persistence and patience will pay off in the end. Trisha’s buck is a beautiful 10-point Kentucky whitetail and the beautiful deer taped out at 142 inches! What a trophy and an incredible story of determination and will. Congratulations, Trisha!