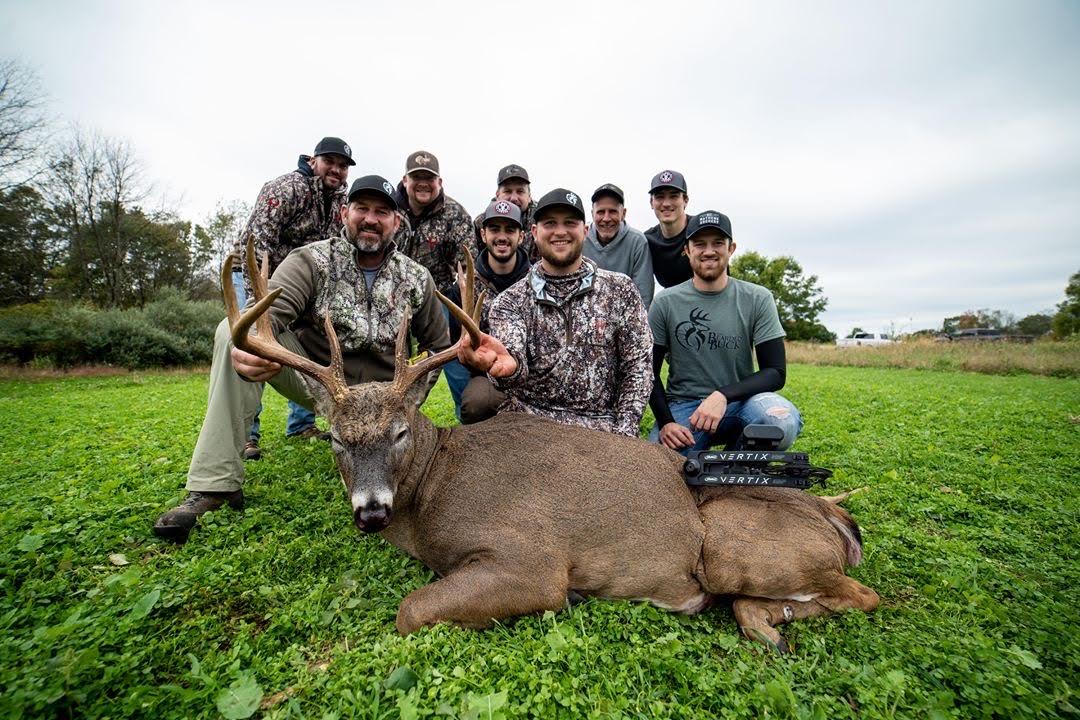 The Bearded Buck out of Western Pennsylvania, started out as a practical joke. Founder of The Bearded Buck, Jerry Tibbott, and one of his hunting buddies transformed that joke into something much more real, now an Outdoor Lifestyle Brand and Entertainment Company. The cast of The Bearded Buck, Austin Tibbott, Justin Sharp, Ron Buterbaugh, and Brett Sharp, dedicates themselves to not only being stewards for deer and turkey, but land as well. I caught up with them to ask ten of our favorite hunting questions. Get to know Austin, Justin, Ron, and Brett below!

AT: Pennsylvania for sure! There’s nothing like sitting in a stand on our home farm!

JS: Oklahoma…I have to pick the home state, but I love to travel and hunt anywhere the opportunity presents itself.

BS: Obviously I love hunting my home state of Oklahoma, but I have enjoyed hunting in Nebraska as much as anywhere I’ve ever been. The people are great there and it’s a target-rich environment for both turkey and whitetail.

AT: Last week or October through the first week of November.

JS: First two weeks of November. The weather is cool and the rut is just getting going!

BS: I used to get really fired up about November 10-20, but hunting the rut can be rewarding and very challenging at the same time depending on our doe numbers.  In the past few years, I have gotten to where I like late season bow hunting in December and January as much as anything because the deer become more predictable again.

AT: Ultimately, it would be mid-morning somewhere in the timber during the rut.

JS: I do love a morning hunt, but I tend to have the most success in the evenings.

BS: I would lean towards evenings just on past success, but those November days are good all day long a lot of the time.

AT: Typical all day for me!

AT: Lock-on is preferred…. there’s just something about being 20 feet up that can’t be beaten for me!

JS: Lock-on preferred to get up in the air, but if no tree, a blind will work just fine!

BS: Depends on the scenario, but I hunt out of everything but a climber.  I don’t think it’s wise for my “dad bod” to attempt a climber.

AT: Foundation Clover. Over 50% percent of our food plots consist of a clover blend which has led to a lot of successes over the years.

JS: Foundation Clover, the deer can’t get enough of it through all phases of the season!

RB: Clover Select – Easy to maintain and love the chicory in there.

BS: The Clover.  We are in farm country and have big ag fields all around us and have used soybeans and corn a lot over the years.  We just recently started planting the clover to offer something in addition to the crops, and the number of deer that are pouring into the clover is impressive.  I also like that clover is a perennial that will last a few years with proper care.

AT: Protein Plus, deer just can’t resist it!

JS: Protein Plus, multiple bucks are on my wall today because of it!

RB: Cherry On Top because it smells so good!

BS: The Big Tine Fortified Deer Blend with the Cherry Rush.  The deer eat it at a rate I have never seen with any other feed on our property.  I can also attribute at least our last two bucks directly to patterning them coming to the Big Tine.

Favorite snacks for the stand?

AT: Gotta love them Zebra Cakes!

JS: I don’t discriminate between snacks.  I like them all!

RB: Nothing, I am laser-focused but if I eat it in the stand it’s pizza or wings.

BS: Nature Valley Oats and Honey bars, jerky sticks…heck, there are days I’d like a pizza depending on how long we stay in there!

JS: Dr. Pepper, there’s always one in my bag.

BS: A tall, ice-cold mountain dew and a cigar work well in most cases!

You can watch The Bearded Buck on Sportsman’s Channel (Air Times HERE).