Whether you’re trying to notch an unfilled buck tag or just trying to stock up the freezer before the end of the year, late season whitetail hunting can be one of the best times to be in the deer woods. There is something about a crisp cold day, watching deer move through the snow, silhouetted against the blanket of white on the ground that makes this time of year magical.

On the other hand, sometimes your spirits can sink low if the season hasn’t went quite as planned or if the buck you have been after has managed to elude you for the past couple months. Below are a few tips to help change your strategy and put it all on the table with the hopes of tagging a late season monster.

It’s no secret that deer are prisoners to their stomachs. This especially holds true when the temperatures plummet and the food becomes scarce so there is no better time, in my opinion, to begin supplemental feeding. By the time December rolls around the November rut has passed and the deer are switching from soft-mass food sources to hard-mass crops that deliver energy they need to sustain the Winter months. This type of food includes acorns, beans, corn and other grains found throughout the whitetail woods.

Supplemental feeding is not only great for attracting deer to a late season ground blind but it also aids in the recovery and health of the deer herd after a long rut. Some areas of the country get pounded with snow during the months of December through February so it helps to maintain a regimented schedule that the deer can depend on. 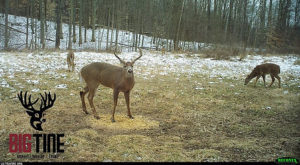 Supplemental feeding is a great way to attract deer to improve late season hunting as well as provide nourishment and energy for deer after the rut.

I personally like to use a combination of Big Tine 30-06 and Protein Plus for my feeding areas. This gives them the energy they need as well as protein to maintain healthy weight for optimal antler growth and development in Spring and Summer.

I’m the type of person who likes to roll the dice when it comes to deer hunting and there is no better time to do so than during late season. By this time in the year, (more than likely) I’ve used all of my vacation time and sick days during the November rut so I’m forced to hunt weekends. The only problem with hunting weekends is that the holiday season is upon us and family gatherings are part of the equation, which can lead to limited tree stand time. With this in mind and knowing that that the clock is ticking for quality hunts, I will make the most of any opportunity, even if I can only manage to slip away for an hour or two.

Don’t be afraid to climb down out of your stand when you see a giant step out in a field where you don’t have a shot. Get aggressive and put a stalk on that deer. Don’t be afraid to push deeper into a bucks bedroom if your trail camera is telling you he’s only showing up to a food source at night. Get aggressive and tuck deeper into the timber where he spends the majority of his time bedded during the day and set up between him and the food. At this point in the year, you have nothing to lose and everything to gain so be aggressive.

Some people think that it only makes sense to hunt during the middle of the day during the rut but I’m here to tell you that late season also offers good daytime movement between 10am and 2pm. Furthermore, I’ve also noticed an increase in deer activity in the middle of the day during late season when a full moon is out and the sky is clear through the night. The moon allows the deer to move more at night and they will usually bed down after shortly after first light. Deer also tend to feed every 6-7 hours so if they fed at 6am and are bedded by sunrise, this can mean stellar mid-day movement around the noon time period based on their feeding cycle. 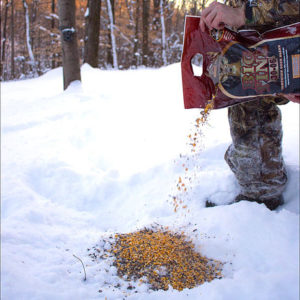 Even a few hours during the middle of the day can be very productive hunting. Pay close attention to cold temperatures, moon phase, and food sources to maximize time in the stand.

For deer hunting during the middle of the day, I like to setup on a ridge or pinch point tucked away in the timber to catch a buck feeding on acorns or moving between bedding areas. Again, deer are slaves to their stomachs so a mid-day sit, even if it’s only for a few hours, can be very productive given the right scenario.

Get Out and Hunt

If you still have a deer tag burning a hole in your pocket, the good news is that there is still plenty of time left in the season to put meat in the freezer or get a shot on a target buck. Hopefully you can use some of these tactics to your advantage and find success during the remaining weeks of the year. And most importantly, remember to have fun and dress warm!