With November lurking just days away, if you’re anything like me, I have a hunch that whitetails are on your mind. We spend the entire year preparing for deer season by planting food plots, running cameras, supplemental feeding, scouting, and practicing with our equipment for the one opportunity at a mature buck. As the temperature drops, patterns are changing, standing crops are being harvested, and most importantly, bucks are getting on their feet. If October comes and goes without your target buck hitting the ground, it may be time to throw your “traditional” plans out the window and roll up your sleeves for the most anticipated time of the year… The whitetail rut!

Here are four aggressive hunting tactics to implement into your rut strategy this fall.

1. Leave The Treestand Behind

Too many times we get caught in the same routine of hunting from a tree, but I’m here to tell you it’s not the only way to kill a mature deer. If the wind isn’t right for any of your sets or you’re crunched for time, don’t be afraid to set off on foot and cover some ground. Hunting from the forest floor allows you to be more mobile and quickly cover terrain in an effort to locate a rutting buck locked down with a doe, or to speed scout an area you may have overlooked in the past.

There’s nothing more exhilarating than luring a buck into a decoy setup and there’s no better time to use one than during sweet November. To kick things up a notch, I like to use a Heads Up Decoy whenever I spot a bedded buck or catch one cruising through a tall grass field. Instead of sitting on the sidelines and watching deer move off the property never to be seen again, using a mobile decoy allows me to make something happen. SAFETY FIRST: Always use caution and be aware of other hunters while using a decoy during a hunting scenario. 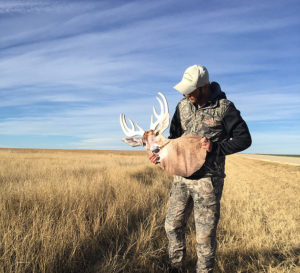 Pairing a decoy with a spot and stalk approach is one of the most aggressive and exhilarating hunting styles.

On the opposite hand of hunting from the ground, we’ve all had moments where we need to tweak our sets and move to the next ridge due to fresh sign or recent intel from a trail camera photo. When the rut is cranking, head into the woods with a stand on your back and set up over hot rut sign such as fresh rubs or scrapes. I prefer a lock-on with sticks as opposed to climbers, so that any tree will be suitable, whereas a climber can be limiting to only straight, branchless trunks.

As a young teenage kid, while heading to school I watched a nice eight-point buck move through the back of my neighbor’s yard during an early November morning. Low and behold, I set up a stand the next evening and killed that buck 15-yards off the back-side of their lawn. We all have different ways we like to hunt, but you have to hunt them where they are, even if it means moving closer to civilization or thinking outside the box.

As a bowhunter, I’m always looking for new opportunities or ways to ambush whitetail deer through creative setups. I’ve hunted from old barns, used junk piles for cover, and climbed into rusty grain trucks with the hopes of catching a wary buck off-guard at close range. 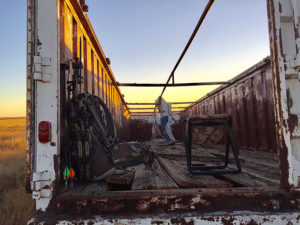 Using the bed of this old grain truck allowed me to glass and hunt a flat, open field in Eastern Colorado.

There’s Nothing To Lose

The month of November only comes around once a year so remember to get aggressive and make the most of the whitetail rut in 2017!